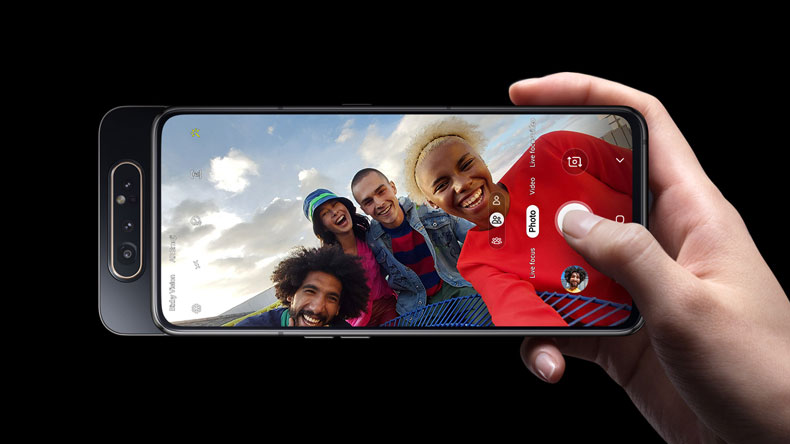 In a world of notch-less designs, Samsung announced their almost bezel-less phone with rotating triple cameras at the back. It’s a new mid-range device from Samsung with triple cameras, which can be used as both front and back facing cameras. This phone is Samsung Galaxy A80 and a new addition in the A series.

Galaxy A80 is shipping with Snapdragon 730 with the clock speed of 2.2 GHz. It comes with Android 9.0 pie out of the box with Samsung’s One UI on the top. The phone’s screen and the triple camera setup are the main highlighting features of the phone. The three cameras consist of a 48-megapixel f/2.0 main lens, an 8.0-megapixel wide angle lens and time of flight lens.  The phone comes with a bezel-less design with a small chin at the bottom. Screen to body ratio of the phone is almost 85.8%.

With the triple rotating cameras, the phone also includes a 3700mAh battery and an 8Gb of ram. The phone also comes with an in-display fingerprint sensor. The Galaxy A70 will be coming in four colors: coral, blue, black, and white. The Galaxy A80 will launch on May 29th. Price of Samsung Galaxy A80 has not announced yet.